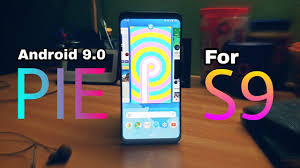 Samsung has already stated rolling out the Android 9.0 Pie beta update for the Galaxy S9 and S9+, as well as the Galaxy Note 9. The new update comes with Samsung's new one UI which is the company's rebranding of Samsung Experience 10.

The new Android 9 Pie beta update is  not available in all regions yet. At the moment, you can only get the update if you are in Germany, India, South Korea or the United States.
If you registered for the beta testing through the Samsung members App or the Samsung + App, then you should have received the OTA update as long as you live in one of the region's listed above.
The update weighs 1,532 MB or 1,681 MB depending on your region. Those who update will get the standard Android Pie features as well as other added features such as support for Unicode 11.0 emojis, new clock styles, general UI changes to aesthetic, Samsung DeX gets dual-display support, and of new look for the Samsung’s stock apps.